By Marine Education and Research Society

Please Help Us Help Them!

Your support directly impacts how often we can be on the water monitoring whales around fishing gear on British Columbia's coast so that professional disentanglement can take place when needed. Charitable tax receipts available for Canadian donors with support above $25. 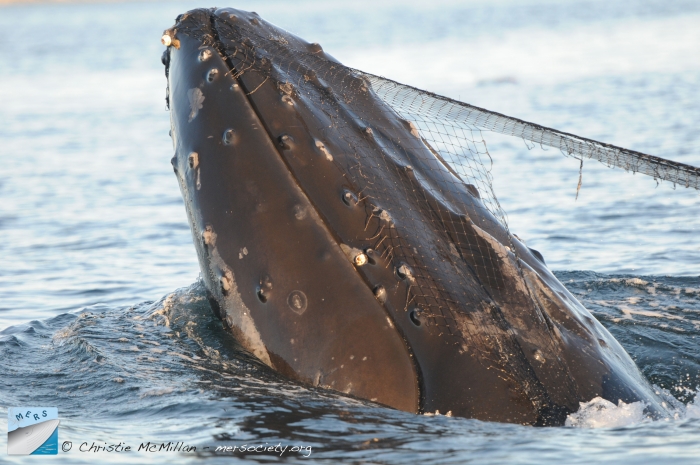 Photo above: Due to MERS responders being on-site, this Humpback Whale (nicknamed "Cutter") quickly had the net removed from his head before he could become further entangled. Photo: Christie McMillan; MERS.

Why Entanglement is Such a Concern

British Columbia's vast coast is home to a wealth of marine mammals including Humpback Whales back from the brink of extinction and four populations of Killer Whales - all of them recognized as being Threatened or Endangered.

The most immediate concern when a whale or other marine mammal becomes entangled is that it will drown; becoming so severely wrapped in the fishing gear that they cannot make it to the surface to breathe.

If they have enough mobility, entangled whales often swim away. This vastly reduces the chances of the whale being relocated and successfully disentangled. The fishing gear can lead to serious injuries and infections, and can make it impossible for whales to travel and feed effectively.

Entanglement has become an even greater concern with the thankful increase in the number of Humpback Whales feeding off BC's coast. Humpbacks do not have biosonar like toothed whales do and appear at times to be incredibly oblivious of the presence of nets and boats. MERS and DFO have been working to better understand how frequently entanglements happen, and preliminary data indicate that about half the Humpback Whales in BC have survived at least one entanglement at some point in their lives. There is very little understanding of how many whales do not survive.

For the last three years, we have been present whenever possible when commercial fishing is taking place around NE Vancouver Island - striving to be a resource for fishermen / women and the whales in case entanglement takes place.

We have invested much volunteer effort and are grateful to have received some grant funding for this work. However, we know that, due to the number of whale entanglements and that tragic reality that many of the whales are not relocated, it is essential to expand both the number of days and geographic range of our efforts.

Every dollar of your support increases our ability to monitor the whales at critical times and locations so that:

Photo above: Entangled juvenile Humpback Whale whose plight was not noted until too late - stranded on the beach near Vancouver where she died. Photo: Caitlin Birdsall; MERS / Cetacean Sightings Network.


In addition to our immense gratitude and you getting that warm, fuzzy feeling that comes with knowing you've made such a positive difference, donors can receive Humpback Whale Sponsorship packages.

For every $50 donated, a MERS e-card featuring the remarkable Humpback Whale photo below will be sent with a personal message to the person of your choosing. 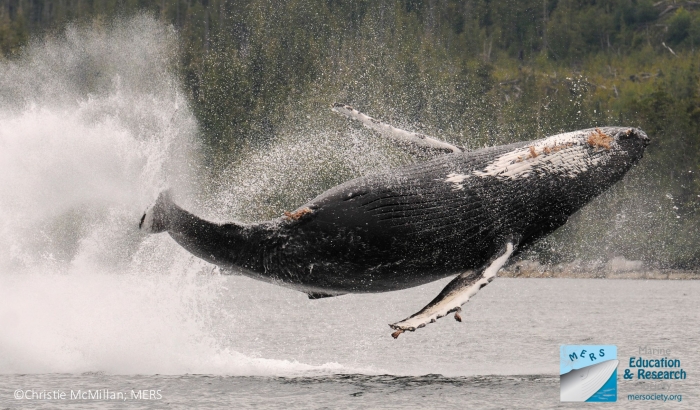 For every $150 donated, the donor will receive a MERS Humpback Whale Sponsorship Package.

Humpbacks in the sponsorship program include "Twister" who has been wrapped in fishing gear at least three times; twice being saved as a result of professional disentanglement.

Donors will be contacted by email regarding which whale(s) they would they would like to sponsor.

For more information about the sponsorship packages, please see this link.

Whale entanglement is a great concern off British Columbia's coast. We can reduce the risks by monitoring whales around fishing gear and ensuring professional disentanglement happens when needed.

For every $150 donated, donors will receive a MERS Humpback Whale sponsorship package. Whales in the MERS sponsorship program include "Twister" who has been wrapped in fishing gear at least three times; twice being saved as a result of professional disentanglement. Donors will be contacted by email regarding which whale sponsorship(s) they would like. Packages include a photo card of your sponsored whale; and a USB memory stick with photographs and the biography of your sponsored whale; and five Humpback Whale vocal samples recorded in the NE Vancouver Island area. MERS will also keep you posted about sightings of your sponsored whale by sending you at least two updates about him or her in the year following your donation.

Est. Delivery Date: In Canada & the USA - within 2 weeks. For other locations - within 5 weeks.
3 claimed
Unlimited left

For every $50 donated, a MERS e-card featuring the remarkable breaching Humpback Whale photo at the link below will be sent with a personal message to the person of your choosing. See bottom of page at www.chuffed.org/project/reducing-whale-entanglement.