Helping Filipino Kids Get To School

Even though I’m Australian, I spend most of the year in the Philippines. I’m Melinda J. Irvine -- a freelance writer, poet, and musician and here in the Philippines I use the money I earn as a writer to help 20+ kids (and their families) with basic necessities — things like books, stationery, school lunches, uniforms, medicines and clothes.

PLEASE NOTE: this perpetual campaign was created for the people who ask me about what I do, and where to find more information about helping. Maybe you'd like to help too.

Why did you go to the Philippines?

I first came to the Philippines in early 2014 to volunteer after SuperTyphoon Haiyan (Yolanda) smashed the coastline of the Western Visayas. Around 10,000 people died (or disappeared into the sea), and millions of families lost their homes.

I’d never really thought of myself as privileged, but living in a small community that had been without electricity, running water, internet, and consistent supplies of basic commodities for months and months — well it made me see myself and the world a whole lot differently -- and I felt compelled to find a way to stay and continue helping. 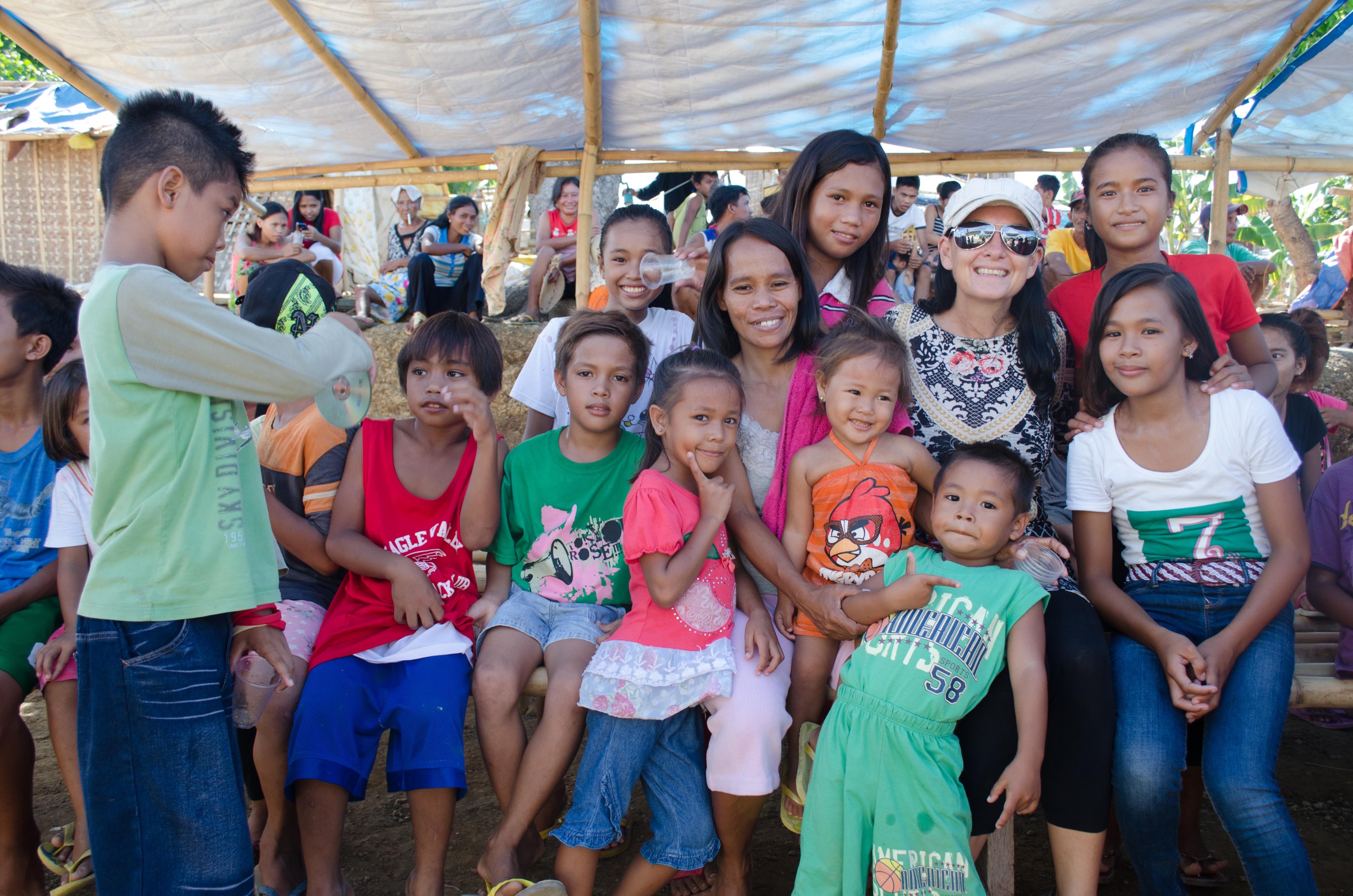 May 2014. My initial stay in the Philippines was 2 months, helping at a school. But in my spare time I began fundraising and used the money to help local families with food, clothes, building supplies, school books, medication, and capital to restart their businesses. I helped this family (above) on my first trip when the World Vision tent they were living in, burned to the ground. (That's me in the sunglasses).

How did you get started?

At the end of my volunteer project in 2014 I went home to Australia completely transformed. Uplifted and obessed, I literally sold everything I owned (including my car, beloved SCUBA gear, and musical instruments) then began campaigning to family, friends and anyone who would listen.

I returned to the Philippines just 5 weeks later, and over the next year (during a series of short trips) became involved in many community projects -- using the money I had raised from donations and selling all my stuff.

But as much as I loved what I was doing, I never intended staying the Philippines for more than a year or so. That was until I met Jerry.

March-May 2014. Helping with a kids project (left), donating water to a hospital (yes imagine a rurual hospital with limited water supplies), and helping Sancho after his stroke (right).

Jerry is an orphaned boy I met in mid-2015. He was just 7 years old when I met him roaming the streets of the Estanica pier -- and somehow he convinced me (someone who had never EVER had children) to stay in the Philippines and take care of him.

I found myself in my mid-forties a mum for the first time, and it was not easy -- Jerry couldn’t speak English and I could barely say hello in Hiligaynon (Ilonggo).

For the first two and a half years we lived in his home village within Estancia, and in the afternoons and on weekends we invited the other kids of the village to visit the back deck of our boarding house. Sometimes there were more than 40 kids out there, and oh boy did Jerry get jealous at times.

2016-2017. The kids of Jerry's village would come to the back deck of our boarding house most afternoons and weekends for extra tuition, music, and games.

During that time I ran music and art and dance activities. Sometimes I  had the children reading poetry, or painting, or playing games, or watching environmental documentaries, or reading from the growing book library. We even did a live stream and broadcasted my friend (and accomplished children's poet) June Perkins to the kids.

As fun as it sounds we were living in a single room boarding house without a kitchen or running water, and the village was subject to frequent blackouts and inconsistent WIFI. Plus I felt sure Jerry had health problems -- I just wasn't sure what.

September 2017. Here we are preparing for our Literacy Day program in 2017. Other times I took the TV down into the purok and the kids watched movies under a tarp their fathers had strapped to some trees.

How do you live in the Philippines with Jerry?

In late 2016 I came home to Australia and ran a crowdfunding campaign (here on Chuffed) and used that money to start a freelance writing business. It was the buffer I needed to get myself back in the workforce and earn enough money to take care of Jerry -- plus continue my projects for the kids.

I stay here (in the Philippines) on a tourist visa, and have to visit the immigration office every 1-2 months -- to fill out paperwork, attend interviews, and (of course) pay for my visa. It's not ideal, but because I'm a freelancer (and my business is a legal entity registered for tax in Australia) I'm ok.

I am currently in the process of legally adopting Jerry but there is a lot of paperwork, processing and (of course) financial criteria involved. 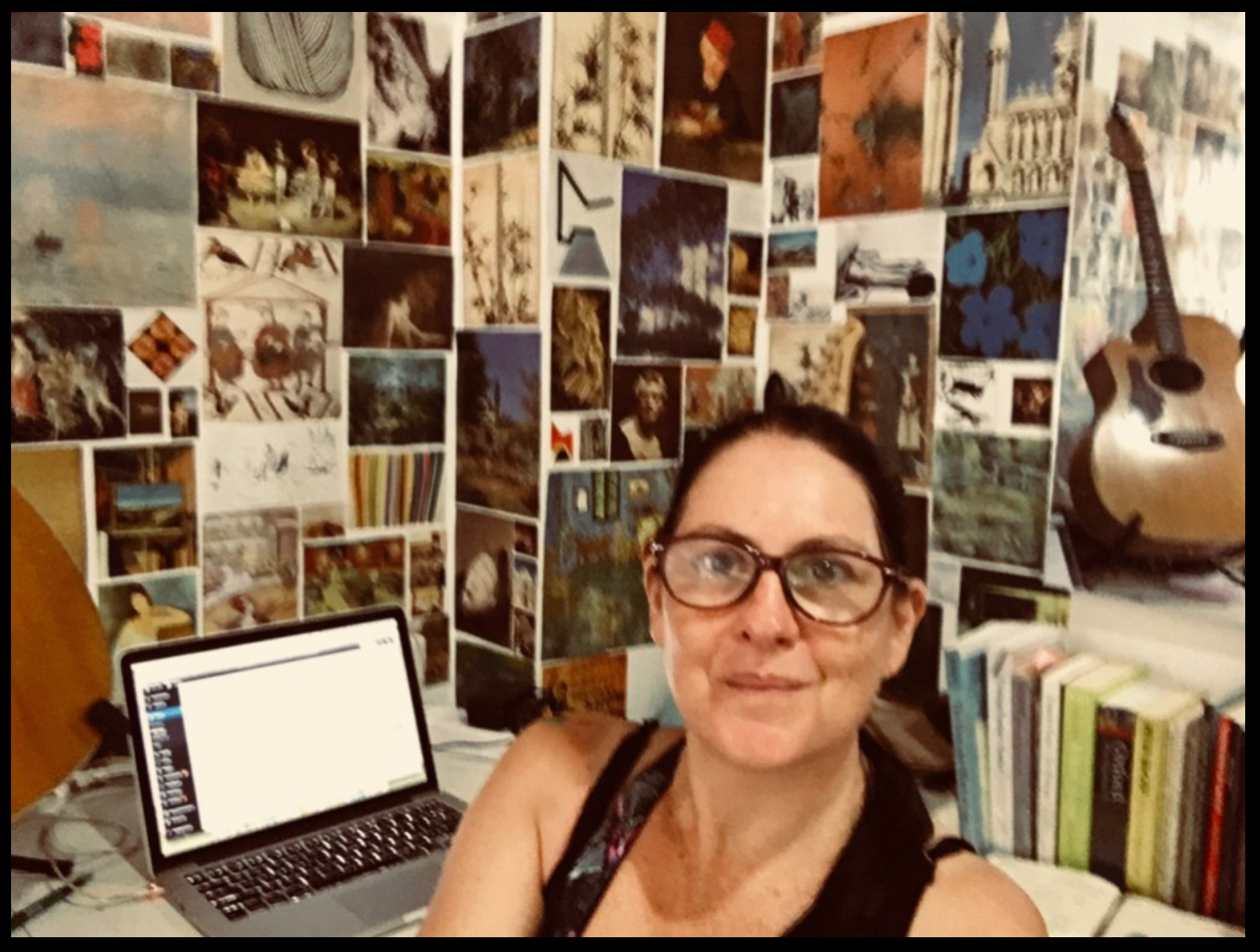 April 2019. Here I am -- now a full-time writer and blogger. I keep the guitar close at hand to remind myself to keep playing and writing songs.

In early 2018 Jerry and I left the rural municipality of Estanica and moved to the Provincial city of Iloilo (4 hours away). We found a nice little apartment, a private school, a paedetrician, better medical care, and a qualified tutor.

Not long after arriving in the city, Jerry was diagnosed with tuberculois, aenemia, burst eardrum, skin allergies, and (more recently) ADHD. So for the past year or so we've been navigating his treatment and overall wellbeing.

Working as a full-time writer it had been hard to tell the kids in Estancia they could no longer come around every day -- plus it was so difficult to work with the daily blackouts, WIFI outages, and NOISE. In the city now, I can concentrate on my client work without interruption and have a clear vision of the future.

I still help about 20 kids back in Estancia, sending cash, food, clothes, school supplies, and other things over to them nearly every week. Below are just a few examples: 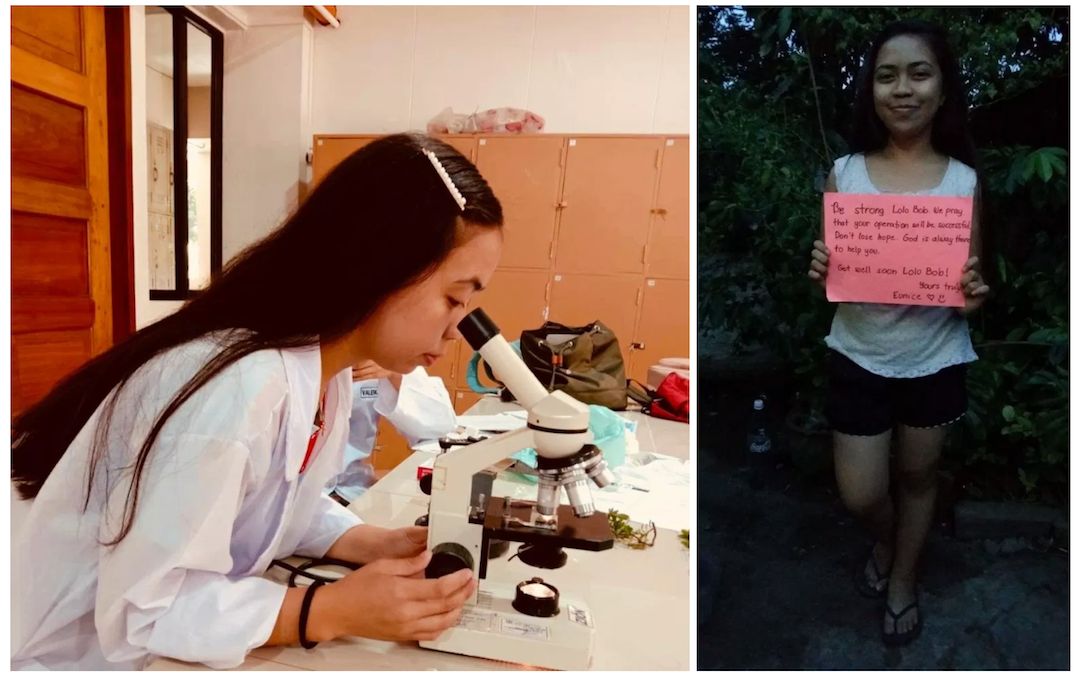 June 2019. Sponsoring the medical studies of Eunice, a girl from the village with big dreams of become a paedetrician and one day opening her own clinic for the children of Estancia. 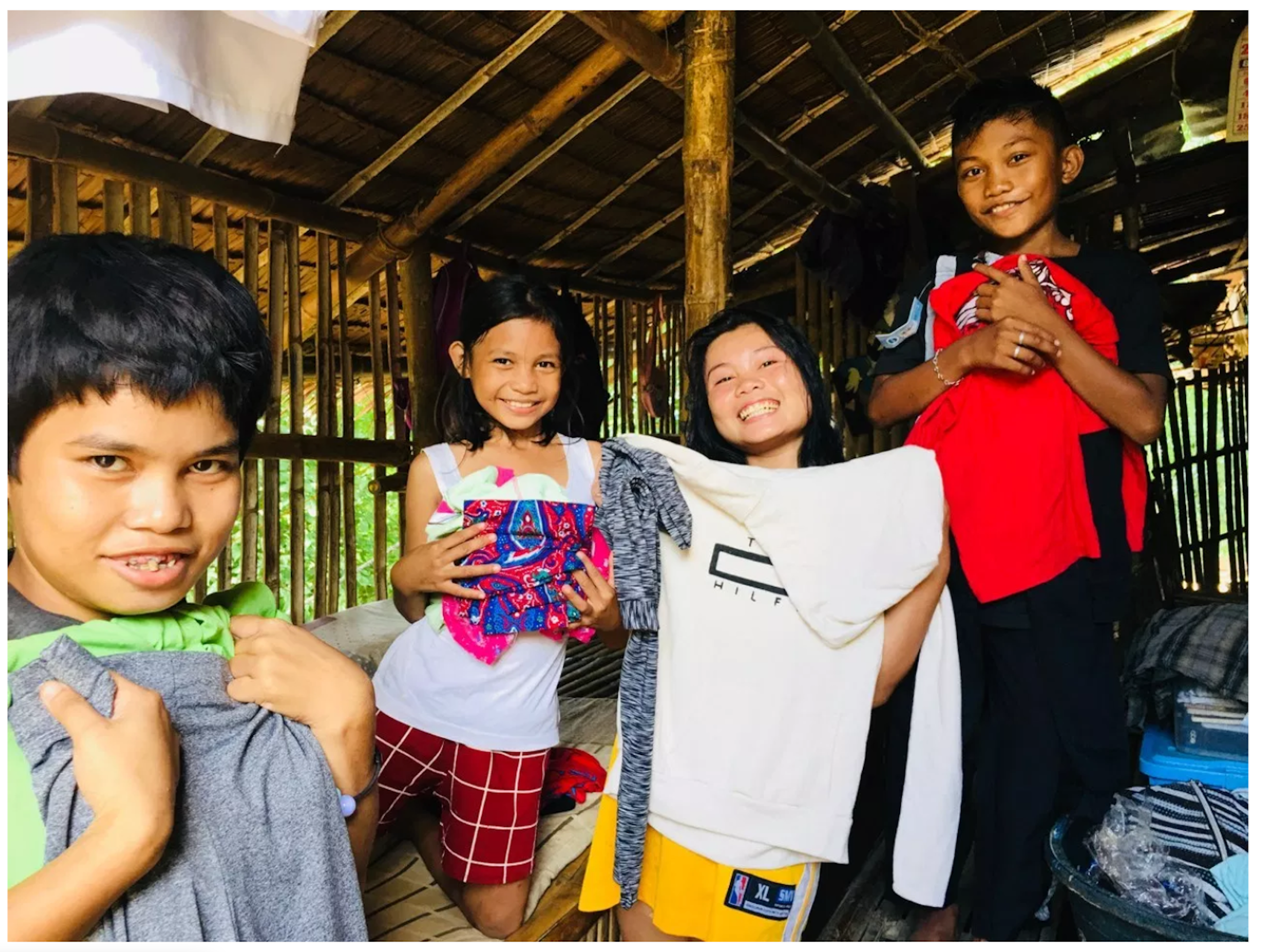 June 2019. Long sleeved shirts and pants for the kids to wear during the latest Dengue outbreak. At the time of writing the youngest brother of these kids is in hospital with Dengue fever. 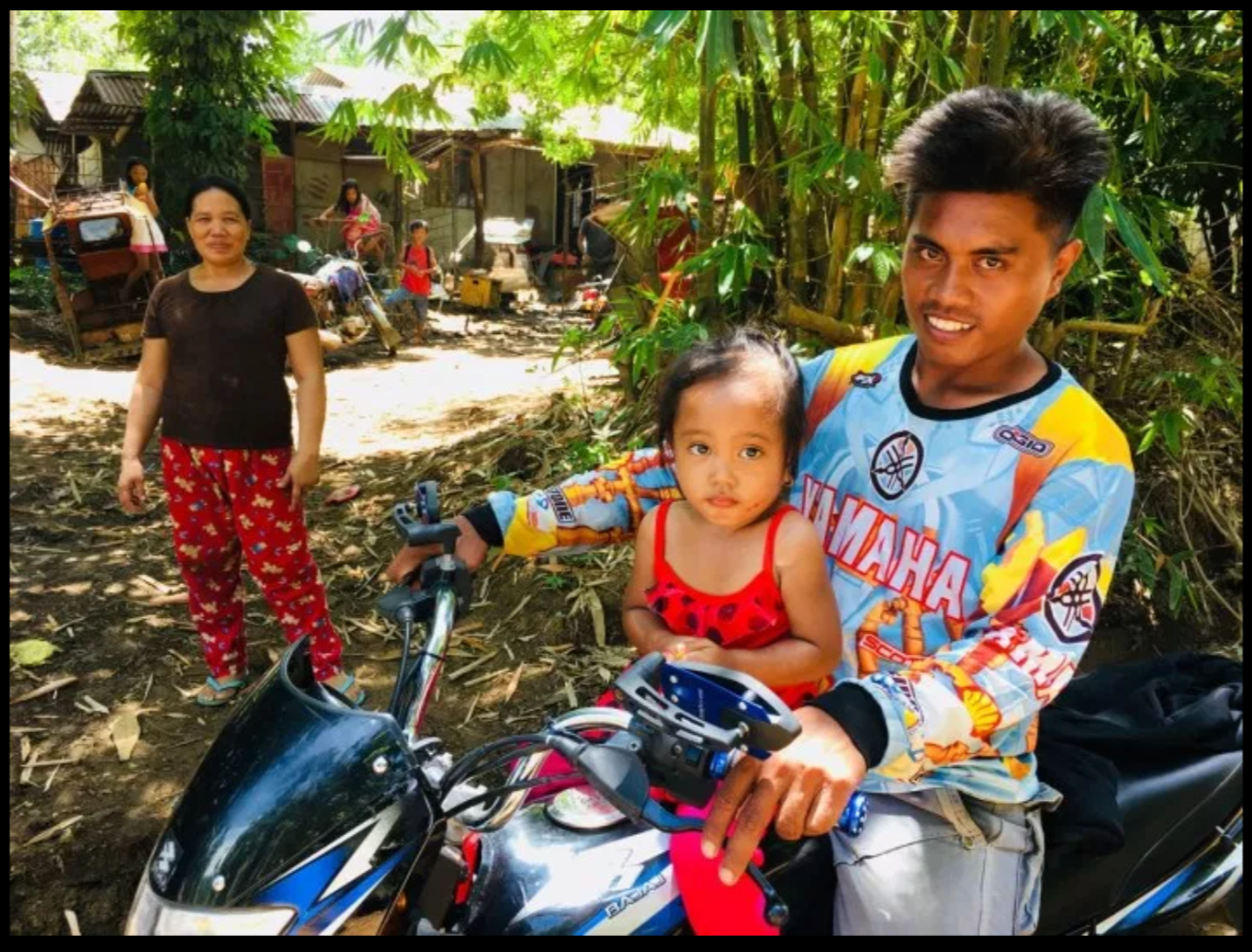 July 2019. Motorbike and sidecard for Jerry's half-brother Ryan, now he can support his wife and little daughter Sky. 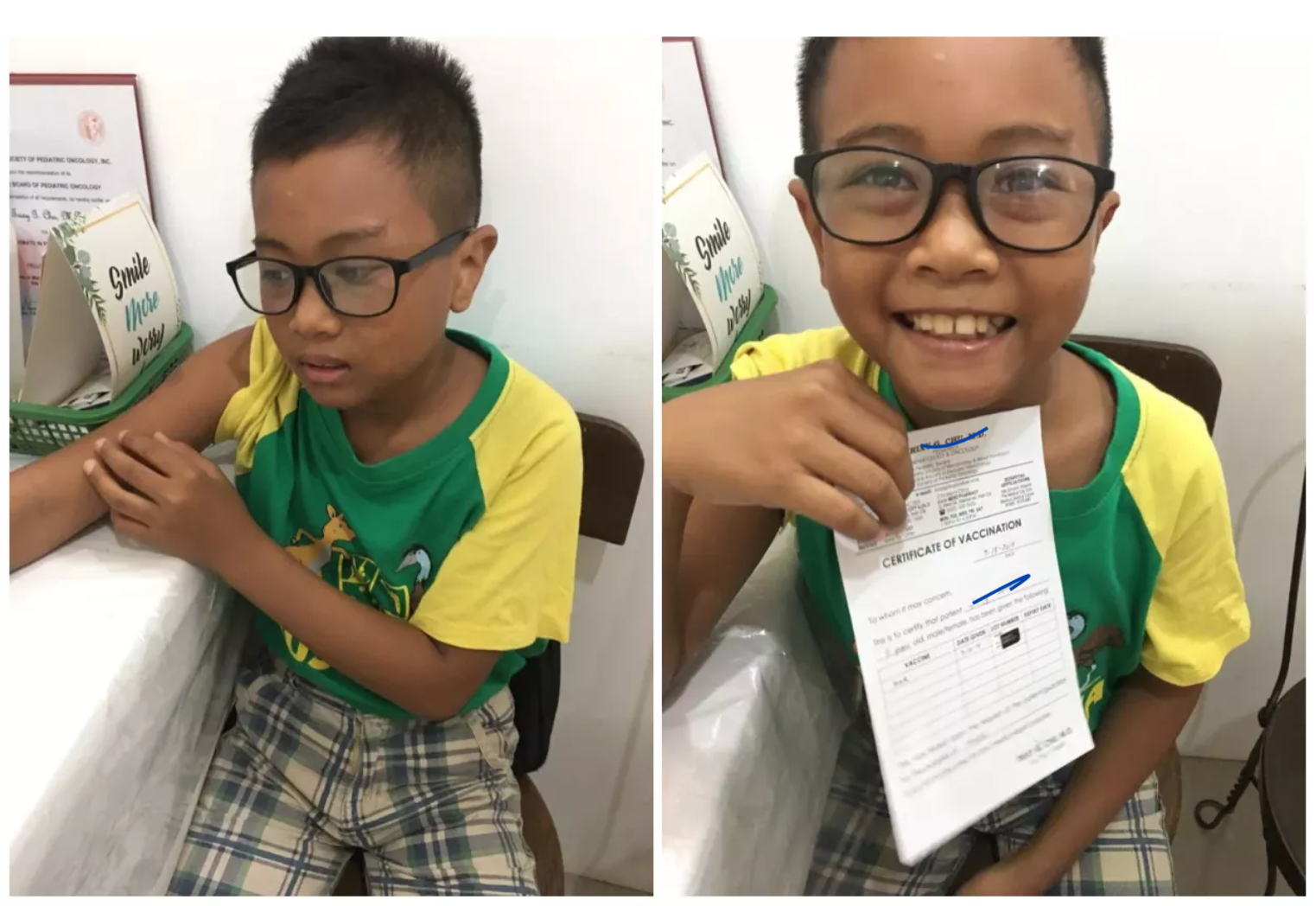 July 2019. Tracking down Jerry's medical records and starting him on a program to get him all the vaccinations he missed. The Philippines is currently experiencing a Measles epidemic so this is essential stuff.

What's my dream for the future?

My dream is to legally adopt Jerry, then build and run a dedicated learning centre in his home village. The learning centre will have reliabile WIFI, art and craft  supplies, books, musical instruments, and toys n-- as well as planned activities.

And it will be safe. I intend for the centre to be supervised by paid (local) teaching staff, with security guards on the gate. According to UNICEF the Philippines is now the global epicentre of the live-stream sexual abuse trade, and unsupervised kids are easiy lured into shady rackets.The safety of the children (especially Jerry) has always been a primary motivator for my projects.

And it's with this vision I move forward every day -- I see a small group of kids actualy finishing school (and maybe even breaking free of the cycle of poverty that has plagued them for generations) -- and a dedicated learning centre for the next batch. 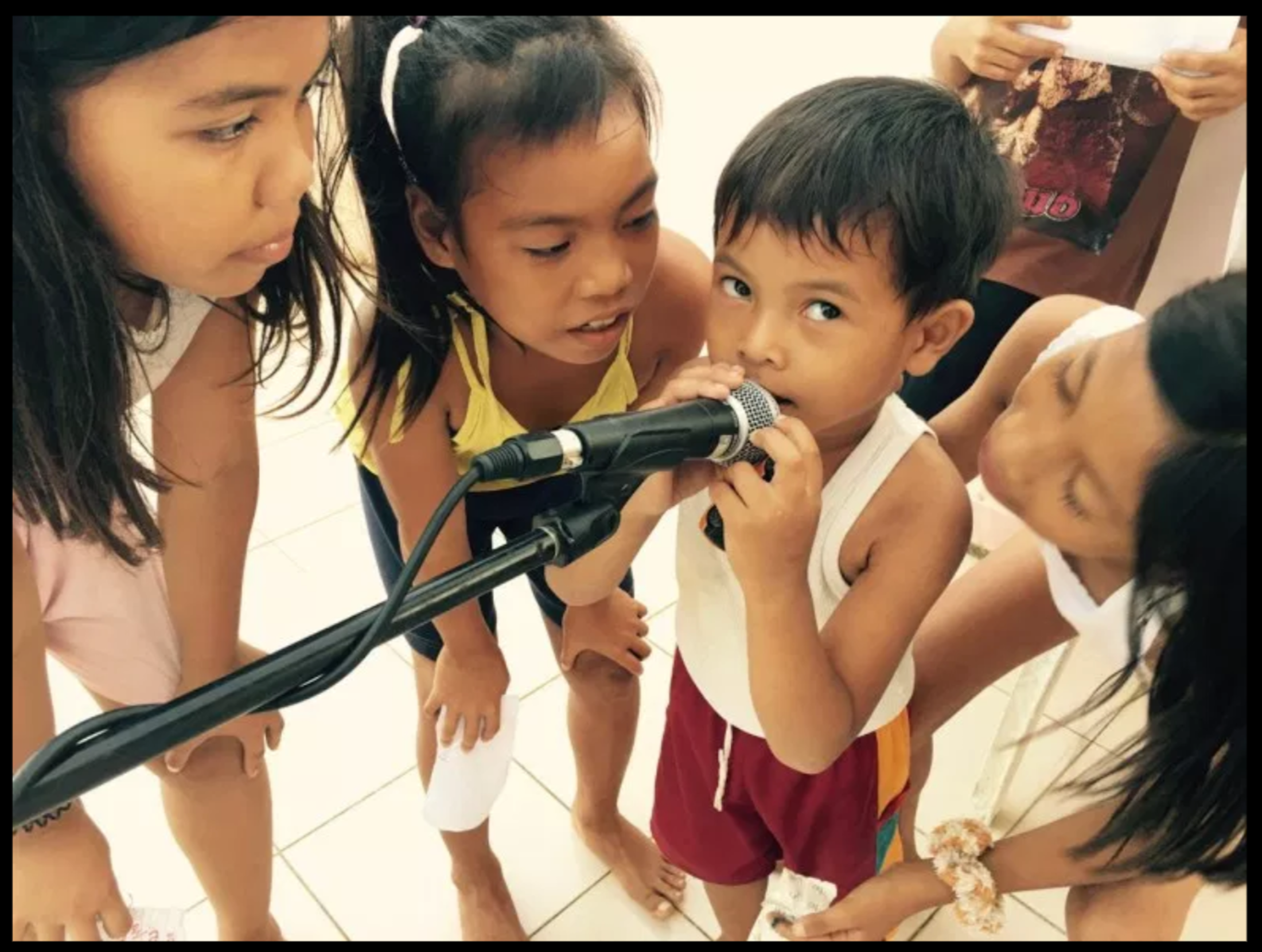 August 2017. Dreaming (and putting actions in place) to one day open a dedicated learning centre where kids like Jan-Michale (on the microphone) can create art, drawings, music, and dance inside a safe space (instead of on an outdoor balcony).

How can you help?

If you would like to contribute to my projects for the kids here, that would be amazing. A donation of any size will also help me realise my dream of legally adopting Jerry -- and one day open the learning centre. Every little bit counts.

If you do donate, you can also opt-in to receive regular updates about the projects, including the adoption of Jerry. I'm a writer and blogger, so I enjoy  sharing photos and the latest stories with my supporters.

Thank you for taking the time to read through my campaign notes. We all give back in our own way, and this is mine.

All my love and blessings. 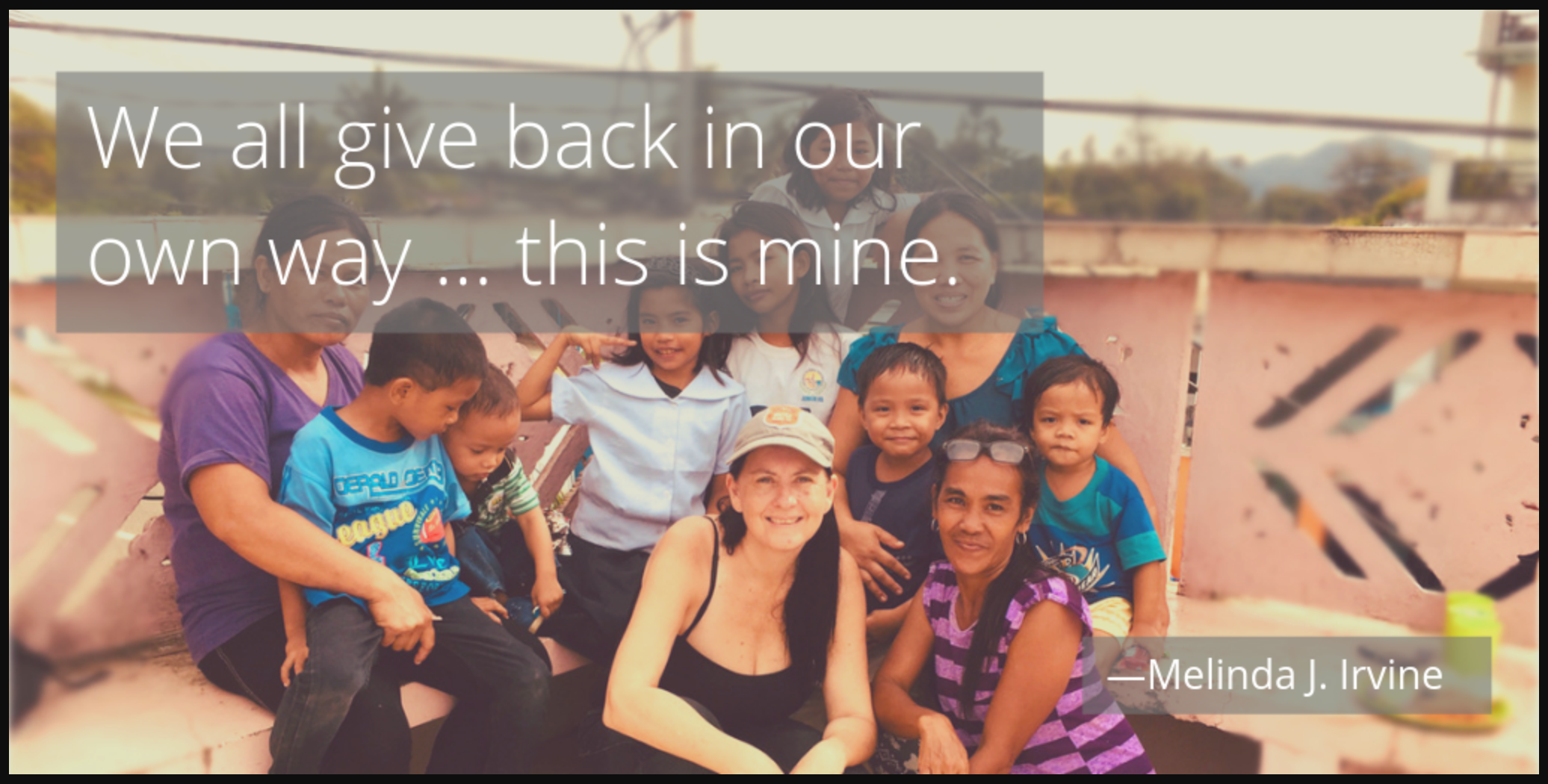 Did you know that 50-60% of Filipino families are deprived of basic eduction? And even though I can’t help every Filipino kid get to school, I can help about 20. Maybe you’d like to help too.

A real hand-written letter, posted with a proper stamp -- from me (and Jerry) to you.

Select
$250 Video of thanks

A personalised thank you video from the kids (and me) -- posted to the social media channel of your choice.

I will write you an original verse poem and publish as a video on the social media channel of your choice.

Did I mention I was a songwriter and musician? I will write you a personalised thank you song and publish to the social media channel of your choice.

Get in touch with Helping Filipino Kids Get To School