EMPOWER THE NEXT GENERATION OF CHANGEMAKERS ENDING HUNGER IN AFRICA

By The Hunger Project Australia

UPDATE: Give in December to double your dollar!

Our goal is to raise $25,000 by December 31 to empower the next generation of change makers ending hunger in Africa because we believe that their future is worth investing in.

One of our incredible investors thinks so too and will match dollar-for-dollar all funds raised via this end of year crowdfunding campaign in December 2015, up to the value of $25,000.

That means together we can raise $50,000 for children's health and education in Africa, and yourinvestment will have double the impact!

What does the future look like for children in Africa?

Imagine a world free from hunger and poverty. A world where every child born has the opportunity to thrive. Where food and medicine is readily available, and not delivered via aid or handouts. Where every human on the planet has their basic needs like clean water, sanitation and education met and our children’s future is more than just an extension of our past. This is the future we are creating: a future where the impossible becomes possible.

Cool huh? This is why we are inviting you to invest in the future of children in Africa as the next generation of changemakers in their communities. Help us raise at least $25,000 by 31 December so these children can grow up and develop into leaders for the end of hunger.

By 2030 - when together we have ended hunger- these children will be young adults and the power will be with them to continue to create a better future for themselves, their families and their communities. Their children too will be raised in a new world - a world free from hunger and poverty. What an extraordinary legacy for children living in chronic hunger in Africa now to pass on to future generations. Supporting the health and development of these future leaders now is crucial. By taking action today you will be our partners in making our vision of a world free from hunger a reality by 2030.

Although huge progress has been made in reducing the proportion of people living in hunger and poverty - over 7 million children will die this year before reaching their fifth birthday. Most are from developing countries and their deaths are largely preventable. The most basic health and education interventions can transform the seemingly IMPOSSIBLE problem of hunger into a very real and POSSIBLE solution to it.

That’s where The Hunger Project comes in.

How does The Hunger Project Empower Next-Gen Changemakers?

We are committed to raising at least $25,000 by the of the year to help fund our work improving child health, nutrition and education in Africa so we can empower the next generation of changemakers ending hunger.

Can you help us? With these funds we could: 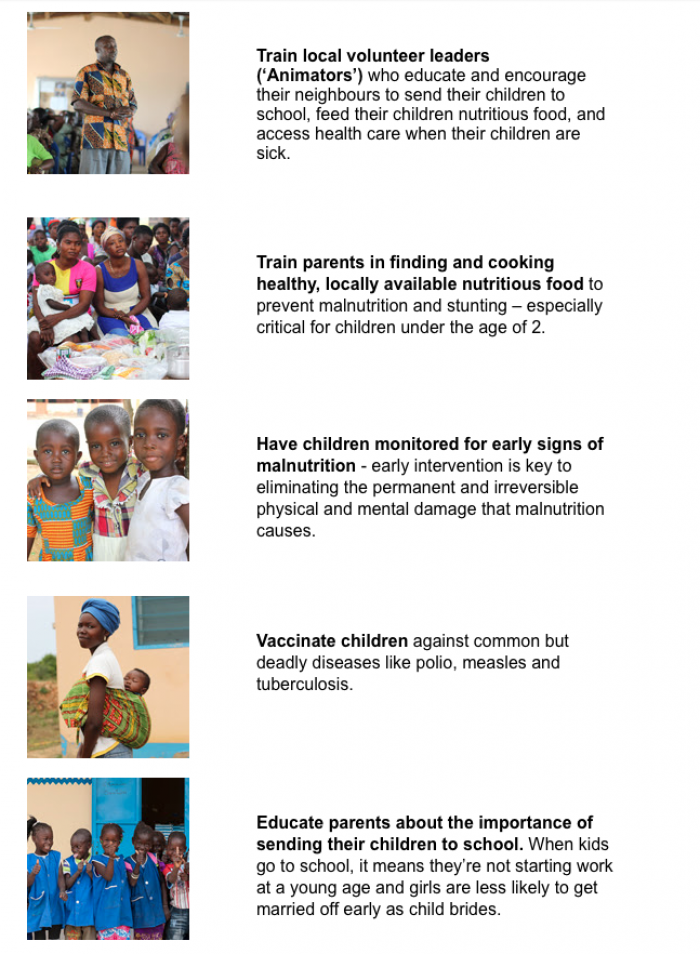 Our recognition of you - yes, we're talking about those perks! When you in invest in this special crowdfunding campaign, you'll have the option to get a 'perk' or 'reward' in return. Just think of it as a bonus 'thank you!' from us to you for your awesome investment! We got some great partners on board who have contributed special items JUST for you via this campaign. Here are the highlights, with all the details to the right! 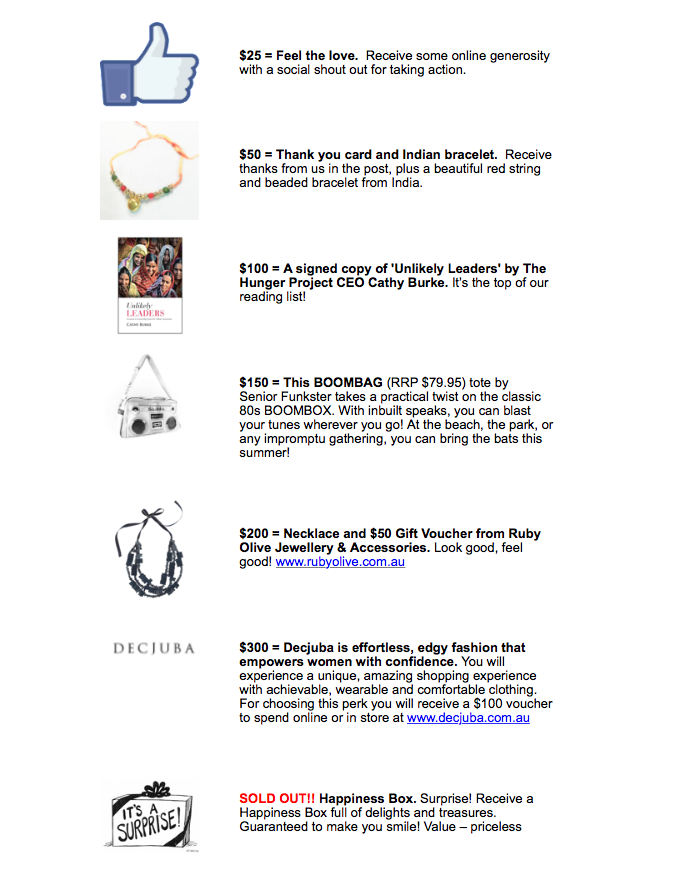 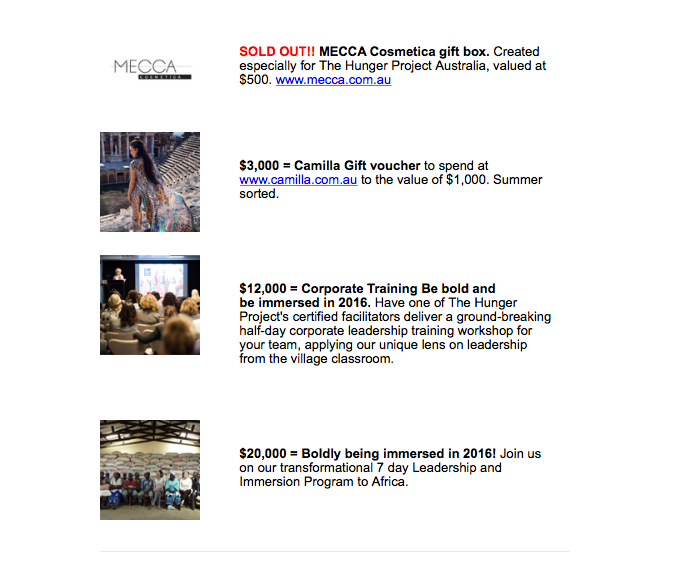 About The Hunger Project

At The Hunger Project, we’ve always believed the end of hunger is possible - and now world leaders and governments have agreed it is too. In September this year, the UN and governments committed to 17 Global Goals that will change the course of history. The first 2 of these goals are to end hunger and poverty. For these goals to be achieved, it’s going to take more than business as usual - and we all have a role to play in stepping up our game. As global citizens, these are OUR goals and it will take a movement of committed individuals and organisations as well as governments to join together to make them happen.

Although ending hunger and poverty may seem like an overwhelming goal and impossible to achieve, significant progress has been made in the last 25 years with the number of people living in hunger being nearly cut in half. Today, 795 million people are living in chronic hunger and poverty. We’ve come a long way, but we still have a long way to go.

We believe that people living in hunger are not the problem - they are the solution. We don’t see 795 million mouths to feed, we see 795 million people who are enterprising, capable and resilient. We believe it is the hungry people themselves who are the key to ending hunger. Our work is to unlock their leadership, capacity and creativity to empower them to break the poverty cycle and create a sustainable future for their families and communities.

For more information, go to www.thp.org.au

Empower the next generation of changemakers in Africa. Help us raise $25,000 by 31 Dec so that children can get the education, nutrition and healthcare they need to lead the end of hunger.

Receive some online generosity with a social shout out for taking action.

$50 A thank you card and special Indian bracelet

You'll receive a thank you card from us in the post with a photo of one of our village partners - plus a beautiful red string and beaded bracelet from India!

$100 A signed copy of 'Unlikely Leaders'

Cathy Burke's work over two decades with The Hunger Project Australia as CEO has given her intimate access to grassroots leaders who are ending hunger in their villages. With all the reasons why it's not possible, the poorest of the poor are redefining what is possible. Their actions are changing the world. Learning from them can change ours too. *Postage within Australia only included. Charges for postage outside of Australia will apply.

This BOOMBAG (RRP $79.95) tote by Seńor Funkstar takes a practical twist on the classic 80s BOOMBOX. With inbuilt speakers, you can blast your tunes wherever you go! At the beach, the park, or any impromptu gathering, you can bring the beats this summer! More info at www.senorfunkstar.com

Decjuba is effortless, edgy fashion that empowers women with confidence. You will experience a unique, amazing shopping experience with achievable, wearable and comfortable clothing. For choosing this perk you will receive a $100 voucher to spend in store or online at www.decjuba.com.au

CAMILLA is designed to make every woman feel beautiful no matter their age, race, size or culture. To welcome in summer, receive a $1000 voucher to spend in store or online at www.camilla.com.au

One of The Hunger Project's certified facilitators will deliver a groundbreaking half-day corporate leadership training workshop for your team/organisation applying the unique leadership lens of our work on the ground building village leaders. A valuable, interactive session that will inspire your team to rethink what's possible in business leadership. *Available within Australia only, Excl. all travel and accommodation expenses.

Be bold and discover your own leadership lessons from the village classroom and join us on our Leadership & Immersion Program to Africa. On this transformational 7 day trip you will see first hand the work of The Hunger Project and our village partners. *T&Cs apply. Excl. all travel and on ground program costs. Contact [email protected] for more information.