Embed
Follow
DUE to OVERWHELMING demand I have now set up a donation system on the BLACK HOLE web page. Same perks as before. We ran out of time to raise the $20k so here is your chance of you missed out.

You can now DONATE through the BLACK HOLE website. www.blackholemovie.com.au 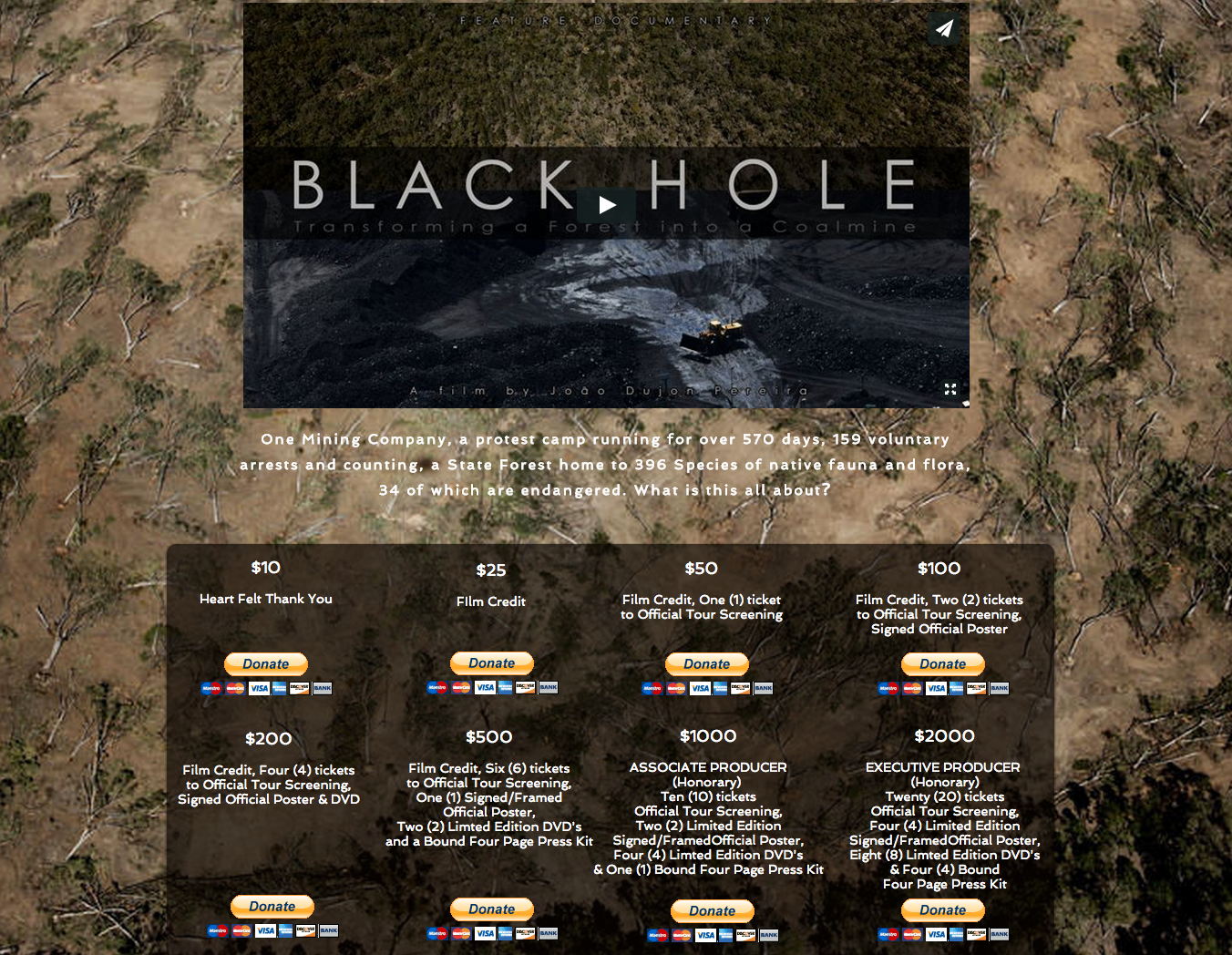 20 HRS LEFT - CHECK OUT THE FINAL VIDEO RELEASE UNTIL THE FEATURE IS COMPLETED....

If you can a contribution would be Awesome 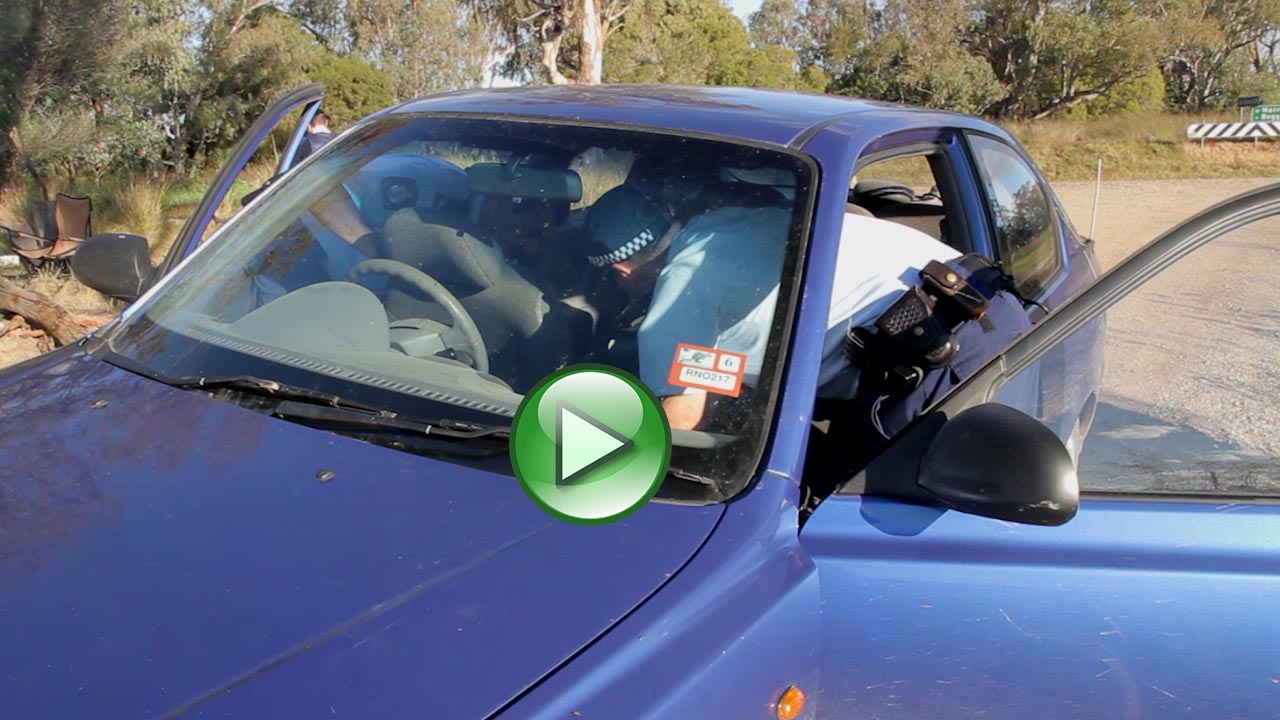 One Mining Company, a protest camp running for over 570 days, 159 voluntary arrests and counting, a State Forest home to 396 Species of native fauna and flora, 34 of which are endangered. What is this all about? 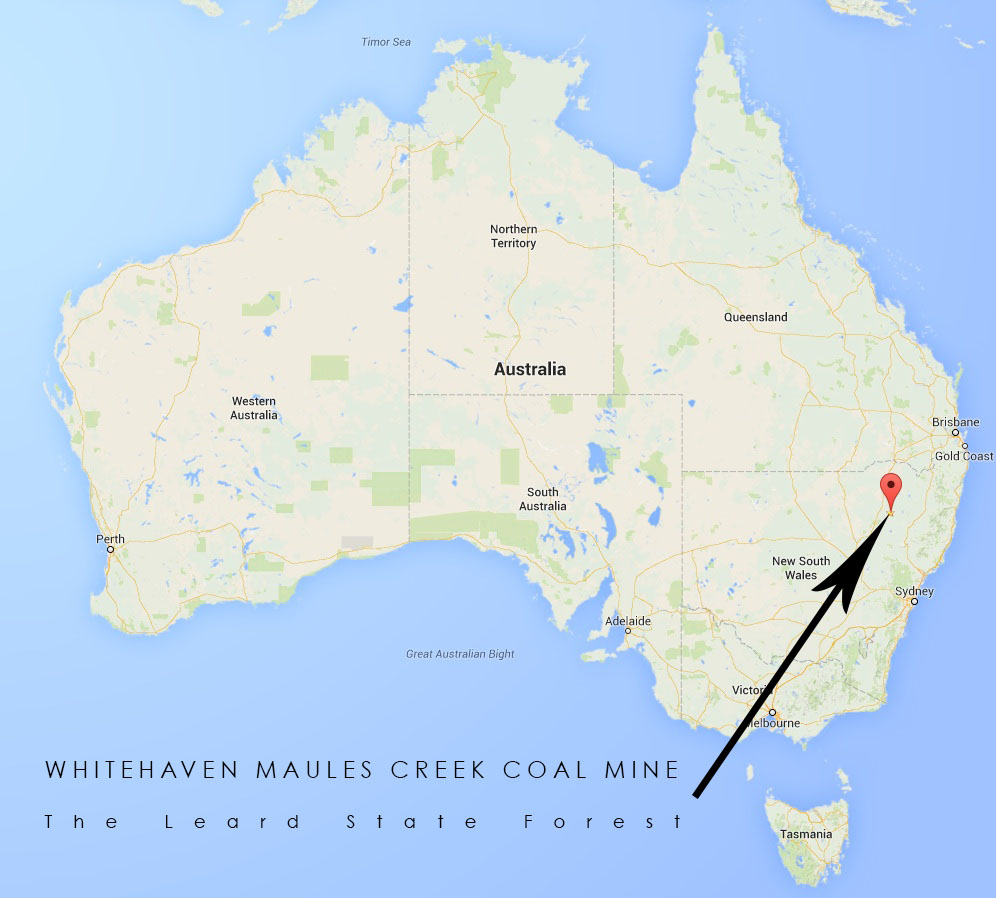 The stage has been set for one of the most intriguing David and Goliath battles in this nations history. Black Hole is the story of one of the most controversial coal mining projects in Australia. This story is happening now.

Filmed in real time and in the moment, this film is capturing the events as they unfold with the excitement of the unknown.

Act Up 3 Direct Action at Maules Creek Mine

Black Hole explores the fight to stop the clearing of the Leard State Forest, transforming it into an open cut coal mine.

Black Hole is a feature documentary that aims to tell the Maules Creek story through the voices of the many diverse and colourful characters including the Local Farmers, Indigenous Elders, Scientists, Community Supporters, Mining company personal, Police and Politicians.

The community concerns range from the destruction of sacred Indigenous burial sites, the clear felling of one of the last intact areas of White Box Forests, including the native flora and fauna, water table contamination, water acquisition rights, coal dust pollution and cost of living just to name a few.

It is estimated that the Maules Creek Mine will release about 30 million tonnes of CO2 equivalent per year, or some 630 million tonnes for the period 2012-2032. To put these figures in perspective, the total of the emissions from the entire country of New Zealand.

On the other side of the fence are political characters at the helm of Whitehaven Coal. These include now one time mining billionaire and former owner of Whitehaven Coal Nathan Tinkler, who is currently under investigation at the NSW Independent Commission Against Corruption (ICAC). Former Deputy Prime Minister under the Howard Government, Mark Vaile who was appointed as Chairman of Tinkler’s Aston Resources Company, and subsequently after the merger became the Chairman of Whitehaven Coal.

The twists continue, when in January of 2013, 25 year old interpreter Jonathon Moylan allegedly sent a hoax press release from ANZ Bank informing shareholders that ANZ was planning to withdraw $1.2 billion in funding for the Whitehaven Coal Mine in NSW on ethical grounds. He is now facing the Supreme Court on criminal charges with the possibility of 10 years imprisonment and a $765,000 fine. 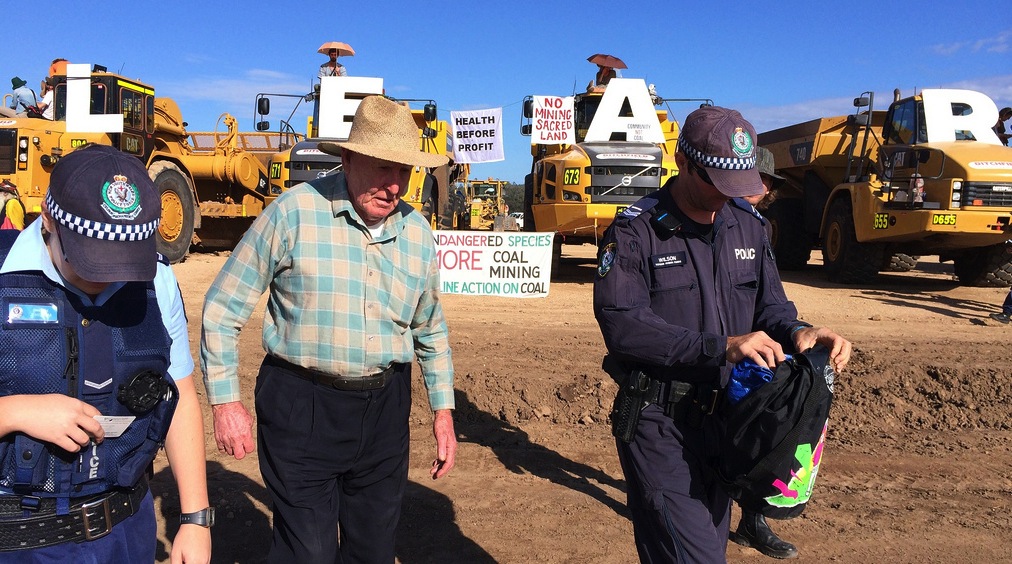 The effect of the community actions have led to the State Government mobilising large Police numbers including Police Air wing, Riot Squad, Dog Squad and Police Rescue. This has included the closing of the public forest, public roads and intimidation of the participants involved in the campaign.

Black Hole will be a lasting document of one of the longest continually sustained actions against a mining company in Australia's history. 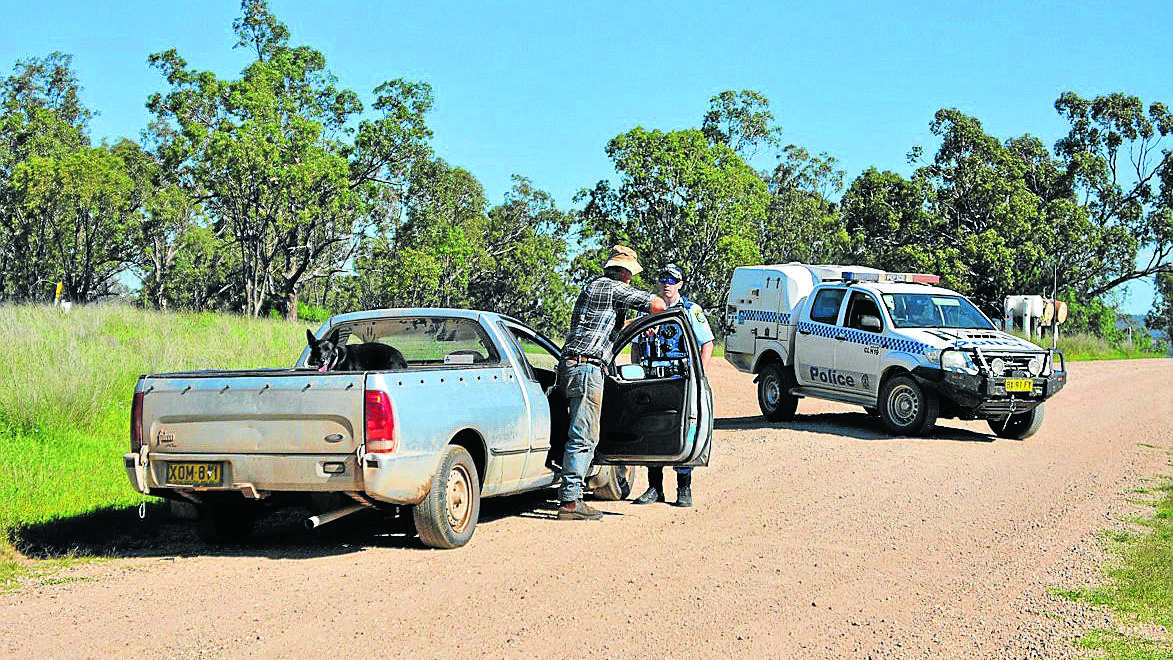 Making a documentary film just about takes us filmmakers into unknown territory the majority of the time. Black Hole is no exception.

Initially my intention was to create a short documentary, but as I have delved deeper into this I found something so short would not do just to this epic event. Only a feature film can capture this unfolding narrative and I am compelled to make it.

This journey has opened my mind to be more subjective, appreciating others opinions even if they are differing to my own. There are valid reasons in any ones mind on why they do or say things, and I am intrigued to hear those views with an open mind.

As a filmmaker I don't see things in black & white, but in many shades of grey. One only dreams of such an opportunity to cover such a significant event in Australia's history.

Black Hole needs to be made - Become a part of History!

HOW THE FUNDS WILL BE USED

These funds will be used to complete the filming, production and post production of the documentary. I have already filmed over twenty (20) interviews and countless hours of the direct action, as well as other selected scenery footage. With your assistance I will film further key interviews and shoot additional footage. My aim from the beginning of the process was to make this documentary as cinematic as possible. highest production standard.

I will travel to Maules creek at the of June and for the next 3 months to complete the interviews, filming and production. Whilst on the road I will be editing, in order to have the film completed as soon as possible to keep they story current.
It is a massive undertaking, but I am capable and up for the challenge, however I do need your assistance.

Your investment will cover:

Director and Assistant Costs
Film Production Costs
Black Hole is being created on a bare bones budget and only made possible as I am multi disciplined, so I will be covering many of the aspects of the production of the documentary. As well, other industry professionals have generously given some in kind support for more technical aspects in post production. A feature documentary of this magnitude usually costs in excess of $250,000 to create if everyone was being paid industry rates.

$20,000 is the target and if we exceed this, all money will go to making the documentary even higher in standard.


Once the production and post production phase are completed the documentary is planned to be released through an official screening tour throughout the east coast of Australia:

Following this tour it will be released on the internet.

Dujon is a Melbourne based freelance cinematographer, editor and filmmaker . As well as freelancing as a cinematographer and editor he runs his production company Optical Alkemi.

In 2006 Dujon’s travels took him to South America for eleven months to volunteer at various sustainable farms. His travels subsequently took him to El Bolson in Patagonia, Argentina. Inadvertently he embarked on what was to be his first feature documentary called La Segunda Conquista (The Second Conquest). La Segunda Conquista went on to be screened in a number of National and International film festivals. This experience gave him the driving passion for producing film, specifically documentary.

On his return he created Optical Alkemi and has produced and directed a number of short documentaries, promos, music videos and short films. Productions have included environmental, arts and human focused work. Including having the video production contract for the past four years at Rainbow Serpent Festival in Victoria.

His passion for storytelling through film increases each day. The ability to entertain, educate and emotionally touch a person is addictive, and it is certainly an addiction he will happily carry for the rest of his life. 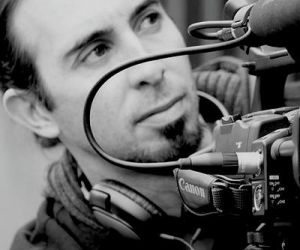 Transforming a Forest into a Coal Mine

A sincere and heartfelt thank you.

* A sincere and heartfelt thank you * Your name on the credits of the film.

* A sincere and heartfelt thank you * Your name on the credits of the film. * One (1) Ticket to Official Tour Screening with Q&A at any of the following locations

* A sincere and heartfelt thank you. * Your name on the credits of the film. * Two (2) Tickets to the Official Tour Screening with Q&A * A signed official poster by the Director

Get in touch with 'BLACK HOLE' Documentary